The Salt Missions Trail Scenic Byway Corridor Management Plan Update (PDF) as been completed and accepted by the governing bodies of each of the villages, cities, and towns along the Byway as well as the Torrance County Commission. An Executive Summary (PDF) is also available.

To stay up to date on activities along the Byway, follow the Salt Mission Trail Scenic Byway blog,  like us on Facebook or send us an email and ask to be added to the general Byway distribution list. 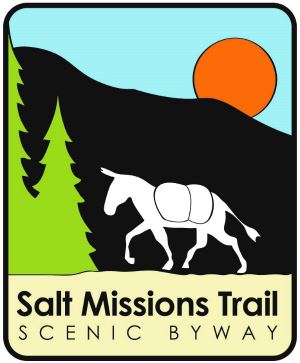 The Salt Missions Trail Scenic Byway (PDF) runs along a historic, winding wagon road from the Village of Tijeras in the mountain pass east of Albuquerque, winds along the eastern slopes of the Manzano and Manzanita Mountains through the Spanish land grant towns and the Cibola National Forest, follows the prehistoric trade route of the Salinas Pueblo Missions, and past the abandoned railroad right-of-way along the edge of the Estancia Basin's salt lakes and prairie. It closes the loop by following a 24 mile segment of the major transcontinental highway, Historic Route 66, back to the Village of Tijeras. A 25-1/2 mile extension southward connects the Gran Quivera mission site.

The Salt Missions Trail was established as a New Mexico Scenic Byway in 1998 as a strategy for generating a sense of regional community, increasing opportunities for economic development, and spurring preservation of appropriate historic and cultural resources in the area. A Corridor Management Plan for the Byway was developed at that time, but the organization responsible for its development and implementation no longer exists.

The Planning Committee identified the following vision and goals for the Byway:

The Committee also provided historical information about the Byway and its communities, brainstormed a list of potential projects, outlined project proposals for two initial projects, and recommended an organizational structure.