The Mid-Region Metropolitan Planning Organization (MRMPO) collects bicycle and pedestrian counts on roadways and trails throughout the region with permanent multiuse trails counters, short duration video counts, and Strava data (user-collected data using a smart phone app). Having such data is helpful for understanding these travel patterns and demand for these modes and also for targeting limited infrastructure investments to key locations to provide the most benefit possible to pedestrians and/or bicyclists. Note that areas with high crash locations and transportation safety concerns are also good candidates for dedicating funds for improvement.

A permanent counter is an automated device located at a site collecting data 24 hours per day, 365 days per year. MRMPO manages seven permanent bicycle/pedestrian counters located on trail networks in Albuquerque. These counters were installed between 2014-2017. The locations of these counters are shown in the map below: 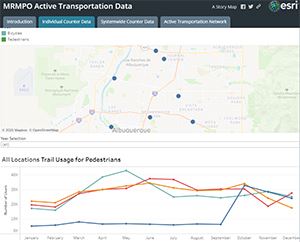 Data from the permanent bicycle and pedestrian counters is shown in the following MRMPO Active Transportation Data visualization tool.

Short duration counts can be collected either manually in person or by some type of mobile counting equipment. MRMPO has access to one video counting device that can be used to collect short duration video counts. After the video is collected, it is manually tabulated. Short-duration counts can also be collected for MRMPO member government entities when requested with advance notice.

MRMPO obtains bicycling and pedestrian data from Strava Metro. People can track their cycling, walking, and running activity with a Strava application on a smart phone or with a GPS device. Strava removes all identifying information from the users and aggregates the data which gives some insight into travel patterns that could indicate common routes that are likely either better connected across the region or where people feel safer riding or walking.