Moriarty, the largest community in Torrance County, has been growing steadily since the early 1970's, largely the result of spillover from the Albuquerque metro area. The community is also a popular stopping place for travelers and truckers on Interstate-40.

The municipal airport with a 24-hour fuel stop, a 7,700-foot runway, a new terminal, 80-hangars, and a new crosswind runway, make it a relief stop for the Albuquerque International Sunport. It's the nation's premier soaring site and home of the Southwest Soaring Museum.

Michael Timothy Moriarty and his family moved to the area in 1887 to escape Iowa's cold winters, and began homesteading, among the few then living in the Estancia Valley. Moriarty became a successful rancher, and when the railroad arrived in 1903, so did more homesteaders. Michael Moriarty became the first postmaster and built the first store. During the drought of the early 1930s, farmers left the Estancia Valley. In 1937, Route 66 was rerouted, passing through Moriarty, and tourist traffic and irrigated farms revived the economy. 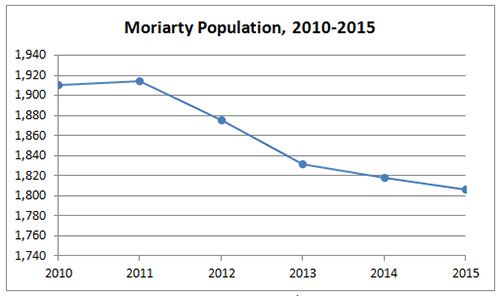