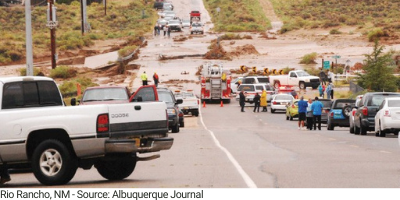 FEMA designates the “100-year floodplain” based on the extent of impact likely from an extreme, 24-hour “once-in-a-hundred-years” precipitation event. However, as the frequency and intensity of extreme events are projected to increase, and impervious surfaces associated with new development expand, runoff volumes increase, and floodplains are enlarged.

See this map to locate the boundaries of designated 100-year floodplains across the region.

Increased periods without rainfall can also increase the risk of wildfires. While forest fires are a natural part of the landscape, the frequency and ferocity of events has increased dramatically in recent years. The “wildland-urban interface” (or intermix) refers to areas where structures and other human development meet or intermingle with undeveloped wildland, and therefore face greater risk of exposure to wildfire hazards. The United States Forest Service puts together this dataset for the region. Learn more.

Urban areas are particularly vulnerable to the impacts of heat because they concentrate large numbers of people, including vulnerable people who may not have the means to move or keep cool. Many people are in urban locations where ambient temperatures are often higher than suburban and rural areas due to the “urban heat island” effect.

Urban Heat Islands (UHI) are where the concentrated energy of people, vehicles, and manmade materials in urban environments combine to make ambient air temperatures more extreme than in surrounding areas. The consequences of these temperature changes can mean life or death. Heat is already responsible for more fatalities per year on average than any other weather-related hazard in the United States. The homeless, elderly, obese, diabetic, and the very young are all especially vulnerable to heat-related illness and death.

This map will be available soon.