The Transportation Improvement Program (TIP) is a document that programs funding, particularly federal funding, for transportation projects.  All projects within the Albuquerque Metropolitan Planning Area (AMPA) receiving federal highway or transit funding must be in the TIP.  The TIP is the region's mechanism of allocating its limited transportation resources among the various transportation needs based on a clear set of short-term transportation priorities.

The six year Albuquerque TIP consists of the first four years constituting the "Federal TIP" plus two informational years.  Updates to the TIP are coordinated with the development of the STIP.  Every two years a "new TIP" is developed adding the next two fiscal years.  The Albuquerque TIP follows the federal fiscal year which runs from October 1st through September 30th.

The TIP is developed by MPO staff and the Transportation Program Technical Group (TPTG) utilizing the process established in the document TIP Policies and Procedures and Appendices (see above).  Projects in the TIP must conform to the area's long range transportation plan which in Albuquerque is known as the Metropolitan Transportation Plan (MTP) and undergo committee reviews and a project prioritization process.

The TIP is adopted by the Metropolitan Transportation Board (MTB) of the Mid-Region Council of Governments (MRCOG) after considering the recommendation of the Transportation Coordinating Committee (TCC) and Public Involvement Committee (PIC) and after the public has been provided an opportunity to comment on the draft document.

The goal of this process is to achieve a program that takes into account the following factors: 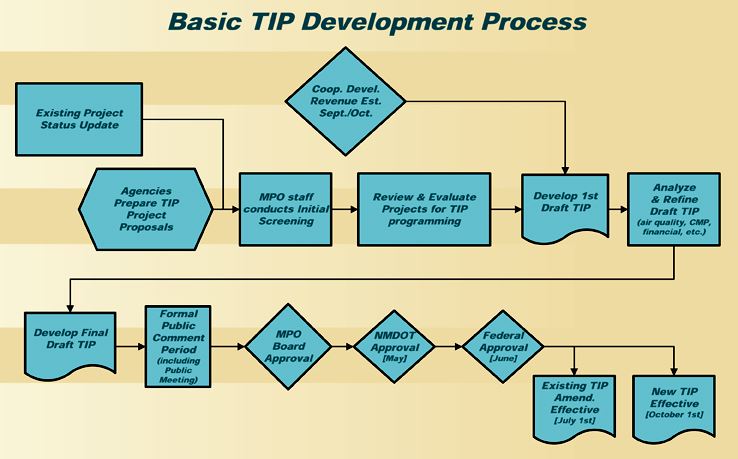 View infographics on the TIP development process, the relationship between the TIP and Metropolitan Transportation Plan (MTP), summary statistics and new trends in funding transportation projects which coincide with findings in our Futures 2040 long range transportation plan. 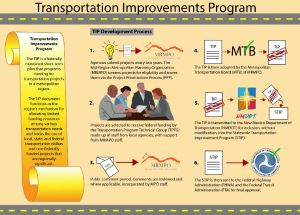