Growth in the Mid-Region Council of Governments Region, 2000 to 2015

According to the most recently released census data, the middle Rio Grande region has grown by 178,282 people since the year 2000 for a total population of 916,996 in 2015. The region currently accounts for 44% of the statewide population. The pace of growth in the MRCOG region had been consistently around 22% per decade since the 1980’s, but since the economic recession of the late 2000’s population growth has slowed substantially, increasing by just 2.2% in the five years between 2010 and 2015. This slowdown can be attributed to outmigration, with many movers in search of new employment opportunities, and conservative changes in family planning historically common during periods of economic uncertainty.

The pattern of growth seen within New Mexico over these years can be characterized as metro-area focused with the majority of growth occurring among the state’s urban areas. In particular, the MRCOG region’s share of the state population has grown over time and this has become more pronounced since the recession, with over three-fourths of New Mexico’s growth from 2010 to 2015 occurring within the region.

The MRCOG region contains three of the state’s six fastest growing counties over the 2000-2015 period: Sandoval County (55%), Bernalillo County (22%), and Valencia (14%). These three counties combined to add 179,000 people to the state over that time, while 15 of New Mexico’s 33 counties lost population from 2000 to 2015. In more recent years, however, Torrance, Valencia, and Southern Santa Fe County have experienced a net population loss. 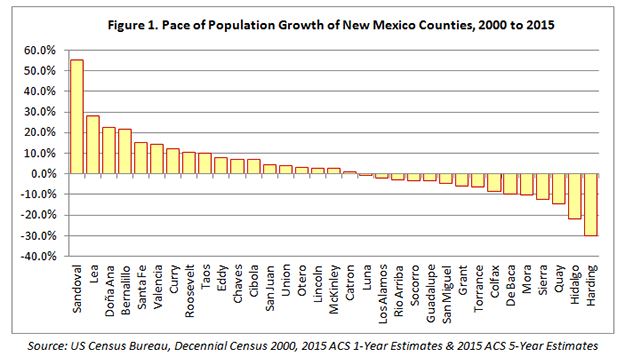